Give Your C1 Corvette Rear Springs a Little R&R 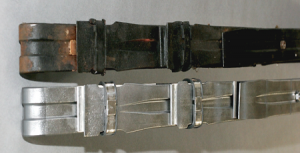 DETROIT, MICHIGAN: If your first-generation Corvette rear springs are looking a little worn out, it might be time for some R&R, courtesy of EATON Detroit Spring.

Original C1 Corvette rear springs were made with spring steel that had a groove in the bottom side of each spring leaf. This grooved steel has not been produced since the mid-’60s, so the original-style springs with the groove can no longer be made.

This predicament could bring many restorations to a standstill. However, for springs that are not fatigued, EATON offers an R&R process that can make them as close to new as possible.

“We had a customer in this morning who happens to be the designer of the original Corvette suspension who I have known for years,” he said. “He brought in a couple of sets of C1 rear springs to be reconditioned. Even though we do a lot of these, there are a lot of ’Vette owners who don’t know we offer it.” 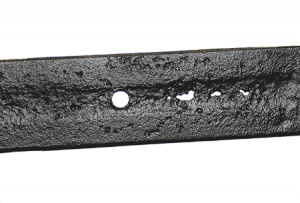 This is fatigued leaf.  If your springs look anything close to this, they are not candidates for reconditioning. 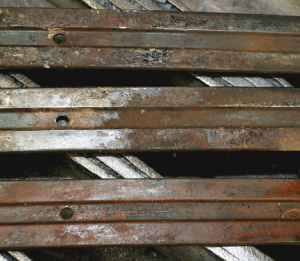 These are good leaves before re-tempering and shot peening. 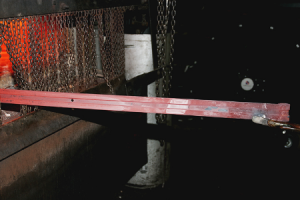 Leaf coming out of the first heat-treat furnace. 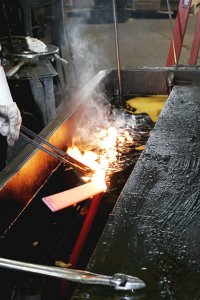 Re-shaped leaf going into oil bath after being annealed and re-shaped. Next step is to go through the second heat-treat furnace that finalizes the re-tempering process. 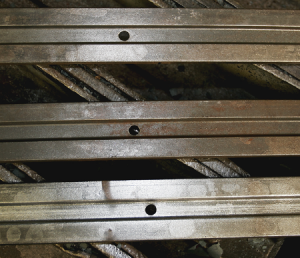 Once through the second heat-treat furnace the leaves are shot peened before being assembled. 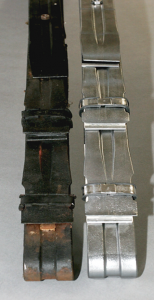 New to the line are front coil spring isolators (FRI300) and rear spring top and bottom isolators (FRI26) for 1962-’65 Ford Fairlane models. Both are now available for shipment. 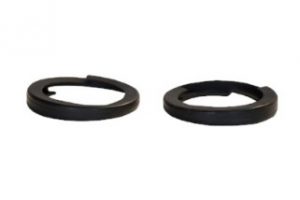 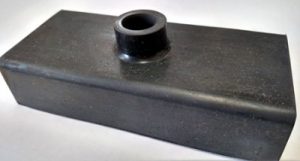 “Our leaf and coil springs are trusted by professional restoration artists and hot rod builders the world over,” said Mike Eaton of EATON Detroit Spring. “Why? Because we manufacture our leaf springs true to the original blueprint right here in Detroit.”

EATON Detroit Spring offers Fairlane suspension parts for 157 year, body style and engine size combinations, available for online ordering. Stock, raised and lowered ride heights can be selected for most applications, and the pros at EATON will also help choose the proper shocks for every setup, ensuring a smooth ride with the proper stance.

The company’s complete line of replacement and custom leaf and coil springs are designed from the original factory blueprints, and customizable to meet special needs. They are made with SAE 5160 high-alloy spring steel and shot-peened for longer life.

EATON Detroit Spring has been manufacturing springs in Michigan since 1937, with a catalog of more than 150,000 stock applications plus a full custom design staff. 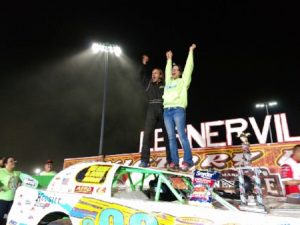 Poway, California, March 29, 2018 – BILSTEIN has announced a continued partnership with The Sweeney Chevrolet Buick GMC RUSH Racing Series  as the “official shock” of the series for the fifth straight year.

The “RUSH/BILSTEIN” shock package is now mandated on three divisions of the series: the RUSH Sportsman Modifieds, RUSH Pro Mods, and the new RUSH non-winged Sprint Cars.  In addition, the $135 package is a popular choice among RUSH Late Model, RUSH Pro Stock, and racers in the three asphalt RUSH classes at Jennerstown Speedway. 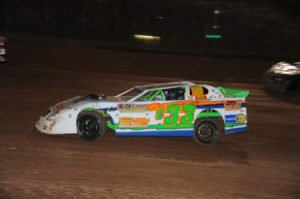 The BILSTEIN name began to grow throughout the RUSH Racing Series in 2014 when regional standout racer Alan Dellinger started having success on the affordable sealed spec shock, dubbed the “RUSH/BILSTEIN” shock package. Dellinger topped the podium the first night he raced on the shocks in RUSH Late Model competition. He found further success winning numerous feature events that season.

The 2014 season was the same year the RUSH Sportsman Modifieds debuted, and while not mandated in Late Model competition, numerous racers have experienced great success running the new “RUSH/BILSTEIN” shock package. 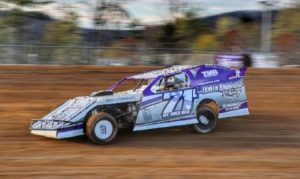 Two years later, the second class evolved, mandating the “RUSH/BILSTEIN” package, and the RUSH Pro Mods quickly debuted as a weekly division at Stateline Speedway. This past season saw Old Bradford Speedway pick up the class weekly on Sunday nights, and McKean County Raceway added several special events.  The class doubled in car count from its inaugural season and is right on track for continued growth as several new drivers are set to join competition in 2018 for year three. 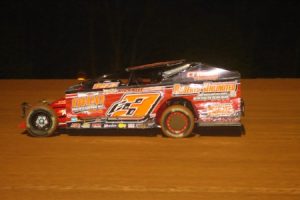 Even racers not mandated to use the “RUSH/BILSTEIN” package have picked up the moniker “BILSTEIN Bandits”  to describe the five-to-eight times price difference between the “RUSH/BILSTEIN” package and other high-dollar shock packages on the market. For example, Late Model drivers Sam Pennacchio and Chuck Medved ran the $135 “BILSTEIN Bandits” for the first time in 2017 and both had their career best seasons. 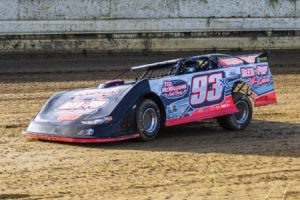 “The ‘RUSH/BILSTEIN’ sealed spec shocks are one of the things that I’m most proud of in conjunction with RUSH,” explained RUSH Racing Series Director Vicki Emig.  “The package has allowed our Sportsman Modified, Pro Mod, and Sprint Car divisions to be on the same, consistent, and affordable shock package, while allowing racers in the Late Model, Pro Stock, and asphalt division a winning option at a very affordable price. We cannot thank BILSTEIN’s Jim Hiland enough for the time and expertise he has dedicated to this program and his willingness to not only work with our Series, but the racers in a one-on-one basis as well.  We’ve never heard a negative word about shocks in our Sportsman Modified and Pro Mod divisions and haven’t had one Sprint Car driver question the implementation of the Shocks in our newest division. This all speaks volumes to the effectiveness of the “RUSH/BILSTEIN” sealed spec shock program they have developed.”

To learn more about the “RUSH/BILSTEIN” shock package, contact RUSH Racing at 724-964-9300 or email info@rushracingseries.com.

TECUMSEH, MICHIGAN: For 19 plus years, National Sales Manager Marty Waterstraut has been an integral part of ididit’s continued success. With immense gratitude for his two decades of service, the Michigan-based manufacturer announces Waterstraut will transition to a new opportunity outside of the company early next month.

“Marty’s expertise and experience have been key to ididit’s accomplishments over the past 19 years,” Ted Keating of ididit said. “We thank him for his dedication and leadership as he embarks on this next chapter of his career.”

Waterstraut has developed a sterling reputation with ididit customers. His knowledge and commitment to customer service resulted in measurable growth and fostered numerous positive developments for the steering column company.

“The decision to part ways with ididit was extremely challenging,” Waterstraut said. “For the last 19 years, I have been proud to work with the team at ididit. The innovation and quality behind ididit’s products has made my time here invaluable as I move on in my career.”

“Our customers truly value Marty and our sales team’s level of knowledge and service,” Keating said. “Thanks to Marty’s long-standing dedication and knowledge, we are confident customers will experience the same level of service and expertise they have come to expect after his departure.”

Operations Sales Manager Mark Kremski and the ididit sales team are available for further information or to answer questions. Mark can be reached at mark@ididit.com or 517-424-0577. 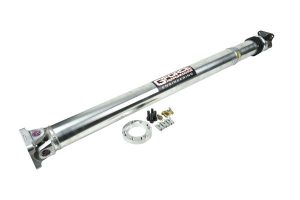 Track numbers for the 2018 Mustangs are exceeding expectations, meaning builders are already hard at work figuring out ways to make them go even faster. The GForce upgrades are ready to maximize the 10-speed’s improved acceleration and response, while handling increased stress and abuse.

“We think racers are going to fall in love with the new Mustang S550, so we got to work engineering products that will maximize its potential,” said Jesse Powell, GForce president. “These new driveshafts and axles are easy, effective upgrades that drivers will benefit from right away.” 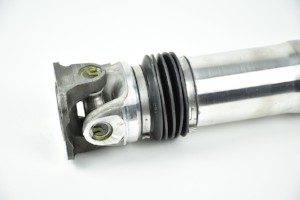 GForce Engineering aluminum driveshafts are precision-engineered, one-piece driveshaftsdesigned for use in high-performance, high-horsepower vehicles. Much like the rest of the GForce Performance Engineering driveshaft line, the 3.5-inch aluminum model for S550 applications is high-speed balanced, features solid-core U-joints and is a direct bolt-in factory replacement upgrade.

No CV joint means there aren’t an extra 5 pounds sitting on the front of the driveshaft adding stress and loads on the output shaft and seals. It also means no CV joint wear or service. The rubber couplers that are found on the OEM driveshaft are eliminated as well. These new driveshafts only weigh an average of 17 pounds.

Each shaft is a direct bolt-in factory replacement for a perfect fit and alignment. Both the front and rear adapters bolt to the stock yoke or flange with the supplied hardware for a trouble-free installation. 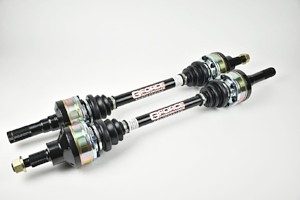 Completely redesigned from the ground up, the all-new GForce Performance Engineering axles for the S550 Mustang are unlike any entry-level axle on the market. This axle set uses CNC-machined billet CV internals, one-piece CNC-machined inner and outer stubs, and the strongest axle bars available in this configuration.
They are a direct replacement for factory half-shafts and are designed for cars with mild bolt-ons to those running superchargers and turbos.
Machined from proprietary aerospace billet alloy for increased strength, the 850-hp axles include a 28-spline axle bar and custom-built CV joints, as well as anti-wheel hop technology.
The axles are rated to 850 hp. Builders exceeding those power numbers are encouraged to learn more about GForce Engineering’s Ford Performance Outlaw axles.

Each component of a GForce axle is meticulously designed, machined and assembled in-house at their Wichita, Kansas-based facility. 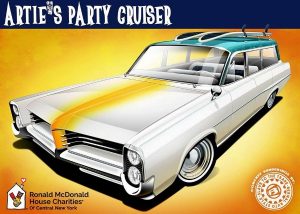 And Eaton was right. What started as a charity pinstriping party organized by Schilling during the Syracuse Nationals had grown in to one of the most ambitious charity project builds in recent memory.

“My original intent was to just cl

ean and paint the wagon, but as projects go, it is now on a rotisserie being completely rebuilt,” Schilling said.

“Artie’s Party” raised $66,000 last year, with proceeds from the pinstriping artwork donated to the Ronald McDonald House of Central New York. Determined to build on the momentum of 2017’s hugely successful event, Schilling’s long-time friend George Munsterman of First Class Productions offered to give Schilling a car to “clean up and paint” to be auctioned off for charity during this year’s Syracuse Nationals. 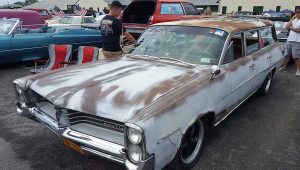 And after the two spotted a ’64 Pontiac Catalina Safari station wagon, Artie’s Party Cruiser was born.

What started out as a simple pinstriping project quickly took on a life of its own. But with the support of manufacturers like EATON Detroit Spring, Artie’s Party Cruiser is becoming a reality.

“When you have the opportunity to make a difference with your work, it’s a no-brainer,” Eaton said. “We were happy to support Artie’s Party Cruiser and look forward to seeing it finished.”

EATON Detroit Spring supplied 2-inch drop springs for Artie’s Party Cruiser, which will give the wagon a nice, Surfin’ Safari stance. Jasper Engines is busy rebuilding the engine while the new chassis components from Ames Performance are being installed at Joe Que’s Auto Body in Poughkeepsie, NY. The classic retro interior will be finished in a white pearl vinyl with blue Pendleton-plaid wool — the same plaid the Beach Boys wore on their Surfin’ Safari album cover.

“It’s really incredible the amount of support we have received from the automotive community for Artie’s Party Cruiser,” Schilling said. “I called up Mike at EATON Detroit Spring to ask him if he made springs for the wagon and he immediately said he was on board and asked where I wanted the springs sent. It is only because of companies like EATON Detroit Spring that we can make Artie’s Party Cruiser a reality.”

Artie’s Party has raised more than $300,000 over the last 5 years for the Ronald McDonald House of Central New York. The organization provides housing and resources for families who are traveling to Syracuse to receive local care for their children who are seriously ill or injured. Artie’s Party has become a major donator to the organization, and with the help of manufacturers like EATON Detroit Spring, 2018’s event is set to be the biggest yet.

To keep up with Artie’s Party Cruiser, and see the build gallery photos, go to www.artiespartycruiser.com

To learn more about Artie’s Party during the Syracuse Nationals July 20-22, go to www.artiesparty.com