A Competition Column for Mazda Miatas

TECUMSEH, MICHIGAN: Vintage Wires® (an IDIDIT brand) has launched a revamped website with added functionality and information for customers.

The unique design of Vintage Wires allows customers to add the old-school look of classic fabric-covered ignition wires to their build while incorporating the convenience and safety of modern wiring systems, making them a popular choice for vintage racers and other classic projects.

“We are pleased to offer our valued customers around the globe added options and convenience when it comes to placing their orders, while maintaining our commitment to dozens of brick-and-mortar locations throughout the continental United States,” said Trever Cornwell of IDIDIT.

Vintage Wires® was acquired in 2017 by custom steering column maker IDIDIT, blending the two companies’ missions to bring modern technology and convenience to classic vehicles while maintaining the original aesthetics.

Visit www.vintagewires.com for more information or to place an order. For model applications and ordering information, contact ididit at (517) 424-0577 or email sales@ididit.com 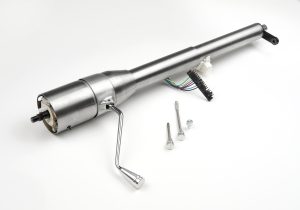 TECUMSEH, MICHIGAN: When quality meets innovation, hot rodders and racers are the winners. Such is the case with steering company ididit’s newly updated line of collapsible columns.

Quality comes with the use of Delrin® shear pins that offer improved resistance to fatigue and wear. Often used in bushings and other components, acetal plastic—commonly known by the brand name Delrin®—is a thermoplastic polymer manufactured by the polymerization of formaldehyde.

Innovation comes from a new inner-workings design developed by ididit engineers that features shift tube improvements and additional perforations for double the amount of column collapsibility over previous models.

For drivers of custom cars and racers, it simply means a safer steering column in case of an accident.

“ididit is constantly researching ways to improve our products,” according to Peter Hathaway, company engineer. 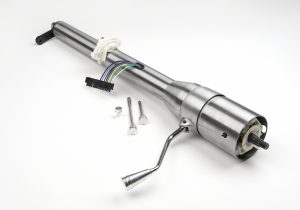 “The recent upgrades to our collapsible columns mean greater peace of mind for hot rodders and racers should they ever experience a front-end impact.”

After researching, developing and building prototypes using Delrin® pins to replace the steel “roll-pin” style shear pin being used in ididit collapsible columns, the engineering team sent the newly-designed columns to third-party testing company Elements to be evaluated for collapsibility under compression in a displacement versus load scenario.  After testing, the shafts built with Delrin® pins showed no discernible loss due to fatigue cycling, and the shafts built with double Delrin® pins were ultimately selected to replace the current design, as the peak loads required for collapse were deemed safe while still maintaining structural integrity and robustness to withstand the rigors of shipping and installation.

After completing testing, ididit’s engineering team conducted an impact test simulating the testing standards used by the United States (and many other countries around the world). A 75-pound weight was dropped from a height of 15 feet to simulate a torso impacting the steering wheel at 15 miles-per-hour. After implementing a new double-tube shaft design featuring additional perforations, the column collapsed over 7 inches, a significant difference that increases driver safety, both on the track and on the street.

All ididit collapsible columns are now manufactured with Delrin® pins and they utilize the new double-shaft design. ididit’s continued efforts to innovate and design new and better-performing products has again resulted in a superior and safer steering solution for drivers and racers.

Steering in a New Direction

“We’re proud to roll out ZP Performance Steering, our newest ididit brand,” said Ted Keating of ididit. “When creating this new line, we wanted to bring the quality craftsmanship and attention to detail that have made our retrofit steering columns the gold standard in the Hot Rod and Resto-Mod world and engineer products aimed directly at the racing and performance markets.” 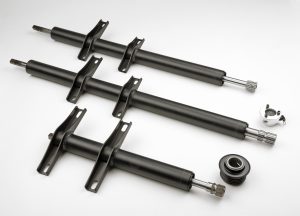 The initial ZP Performance Steering column line features two offerings, a base model for pure race/strip applications, and the Pro-Lite column, which was released last year and has become a favorite for street-strip to road and touring high performance applications.

At just 4.6 pounds, the ZP Base Model, the “Pro Fab” is a bare-bones, no-frills, retrofit column for drag racing and competition applications that has been stripped of turn signals, tilt system and anything else that might add weight or get in the way of getting down the track.

Meanwhile, the ZP “Pro-Lite” is a top-tier, lightweight column that retains all the safety features of a standard steering column to blend function with performance. Coming in at less than 6 pounds, it nonetheless provides all the creature comforts needed for an enjoyable drive with features including self-canceling turn signals, four-way flashers, horn wiring, 3-7/8″ wiring plug and a 1″ 48 lower shaft. It also collapses a full 5 inches for enhanced driver safety.

ZP Performance Steering will also add the “Pro Prep” performance steering column to its lineup, bringing the safety of collapsibility to the sleek design of the ZP “Pro Fab” retrofit race column.

ZP Performance Steering’s Pro Prep, Pro Fab and Pro Lite columns will also be available to be married with quick-release steering hubs. Ididit, LLC recently acquired California-based quick release steering hub and steering box company Schroeder Steering from Gary Schroeder. These Quick Release Steering Hubs (QRSH) will provide performance customers with easier entry and exit into the driver’s seat. In fact, quick-release hubs can be added to any steering column, whether it is an ididit/ZP product or not.

“We’ve taken the knowledge and engineering capabilities we’ve been developing in hot rod and custom circles since 1986 and applied them to the street/strip market,” Keating said. “Racers and performance enthusiast are going to love the quality and versatility of the new ZP Performance Steering line.” 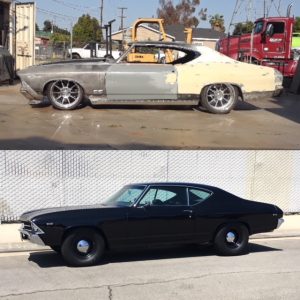 TECUMSEH, MI: Mitch Kelly and the team at Kelly and Son are hard at work on a project to remember—one that’s a prime example of the great work grassroots builders produce every day that deserves to be celebrated.

This particular 1969 Chevrolet Chevelle is slated to be the first-ever vehicle to appear in ididit’s Hot Rod Alley booth at the 2018 SEMA Show. And, although it’s only the fourth project the Bellflower, California shop has tackled, Kelly knows it needs to be special.

“I’ve been to SEMA a couple of times and to have a car right there down the middle of the show—I know how prestigious it is,” Kelly says. “We’re pretty excited.”

Such enthusiasm is typical of passionate builders across the country who turn wrenches not for a paycheck, but because it’s what they love to do. Recognizing their talent and dedication is the idea behind steering company ididit’s inaugural I Did It With ididit Tour, which has been stopping at grassroots races and car events across the country this summer in search of not only the best vehicles, but the up-and-coming builders that are the backbone of the aftermarket industry.

“The tour is part of our dedication to showcasing grassroots builders who continue to keep building in the face of challenges,” says Ted Keating of ididit.

Kelly is the perfect representative of the type of builder the I Did It With ididit Tour was created to celebrate. Having made a name for himself and his shop painting semi-trucks, he’s now adding project cars to his resume.

More than halfway through the ididit build, Kelly reveals the Chevelle won’t necessarily reflect the shop’s signature style, forgoing lots of chrome and shine for a more subdued black-and-painted appearance.

“The paint job will be flashy,” he reveals, “but we’re not doing any bling on this one.”

That doesn’t mean it won’t make a bold statement, however. The Chevelle has already undergone more than 500 hours of sheet metal work and boasts subtle styling enhancements including 1970 Impala headlight buckets and a custom grille. The goal is for a traditional-yet-enhanced Chevelle look—piloted via a tilt steering column from ididit, of course.

“The car’s been dropped, lowered and tucked,” Kelly notes. “Everything from the back to the front is all flowing. We really like the direction it’s going.”

Along with the ididit tilt column, other upgrades will include: Wilwood brakes with hidden master cylinder, Eddie Motorsports hinges, KICKER stereo system, Ron Francis Wiring harness, a custom interior, and bedliner material in place of undercoating.

Approaching the Oct. 30 opening of the SEMA Show, Kelly says the build is progressing as planned—if he can keep from messing with it, that is.

“We’re ahead of schedule, but every time I turn around, I’m making something new and hard on myself.”

Still, Kelly and the crew recently bolted on the wheels and tires and rolled the base metal car out into the sunshine for an inspection. “We sat there for probably an hour saying, ‘I think I like it,’” he says with a smile.

The hope is that show-goers will, too, when they visit ididit’s SEMA booth #22989.

“We invite everyone at the show to stop by and see the finished product,” Keating says. “We have never had a project car in our booth before, but I know that the team at Kelly and Son are hard at work building a project to remember. You won’t want to miss this one.”

Meanwhile, builders and fans are encouraged to follow the I Did It With ididit tour at @ididitsteering on Instagram and track the #ididitwithididit hashtag on social media for updates, photos and videos. Builders and enthusiasts who make it out to a tour stop should be sure to tag the company, as fans at each event will receive an I Did It With ididit Tour takeaway.