Statesville, NC: The 50th anniversary of the highly anticipated SEMA Show did not disappoint. With hundreds of custom cars proudly on display, the flagship automotive aftermarket trade show is synonymous with showcasing the best builds from around the world. 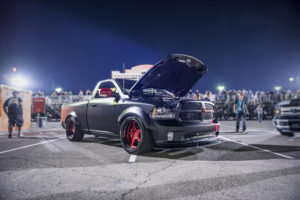 The Kooks Headers and Exhaust booth was home to one of the show’s most talked-about vehicles: the 2016 Dodge Ram 1500 “Hellfire” built by Mike White and the Dallas Speed Shop crew. The 775-horsepower Hellcat motor, matte black paint, wide body kit, race wheels and full Kooks headers and exhaust systems made the truck stand out in the crowd of outstanding vehicles on display.

So it came as no surprise that “Hellfire” won the Truck/SUV category in the coveted Gran Turismo Award finals, announced Wednesday morning at SEMA. A tradition since 2003, the winner of the award eventually finds their car digitally recreated within the Gran Turismo video game series. And although a ’51 Ford Coupe built by Bruce Levens won the overall Gran Turismo award during the GT Awards party Thursday night, the Kooks team was honored to be part of such an innovative and impressive build.

“The ‘Hellfire’ was an amazing project to be a part of,” Chris Clark from Kooks said. “We were honored to win the Truck/SUV category for the Gran Turismo award because the competition was fierce. We look forward to being part of another build for next year’s competition and hopefully seeing a Kooks-powered car in Gran Turismo very soon.” 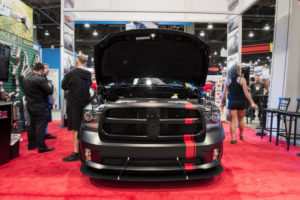