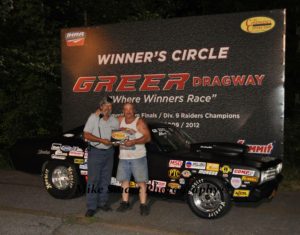 Kingsport, TN: Performance industry mainstay Hedman Hedders understands how important grassroots racing has been to the success of the company. After all, owner Bob Vandergriff has described himself a racer first, business man second, who understands “the sportsman side is where the numbers are – and obviously we are in a numbers business.”

“We have seen the program expand tremendously over the years from a handful of drag racing tracks exclusively, to dozens of drag racing and oval tracks across the country,” Ron Funfar, President of the Hedman Performance Group said. “We feel the program offers us a great return on our relatively small investment, and comments of appreciation we get from weekend racers when we attend races are outstanding.”

Since 1994, Contingency Connection has coordinated a “make sense” marketing approach to reaching the masses of do-it-yourself, grassroots, racing enthusiasts that represent the largest market segment in the sport of racing. The program has grown to include nearly 100 sponsors and 100 tracks and series making it the largest, most effective way to promote products and services at the grassroots racing level.  Its reach is extensive, yet its concept so simple you might wonder “Why didn’t I think of that?”

Their flagship Racer Rewards program directly connects manufacturers with race tracks, traveling series, racers, and fans through a simple product couponing program and an aggressive on-site track presence with signage, announcements and decals on the race cars. Collectively manufacturers post an impressive $100,000 in Racer Rewards at each track, racers display manufacturer stickers and weekly winners earn certificates towards the purchase of performance products, which drives business back to the manufacturer.

“Both the Racer Rewards and AERA Engine Professional Rewards are aimed at connecting top manufacturers with weekend warriors and local shops that are the heart and soul of the racing industry,” Jackie Ressa of Contingency Connection said. “Our main goal is to put sponsor brands at the track, in the stands, and in the shop with end-user customers.”

“All of our companies have a long history of involvement in racing and although there was a steady increase in the number of racers at the dragstrip, it was still very difficult to get the Hedman Hedders, Trans-Dapt and Hamburger’s Performance names in front of the small town, back road, Saturday night racers,” Marc Lewis of Hedman Hedders said. “In the early 90’s, when Jackie Ressa and Ronnie Ball approached us about getting involved in a race program that focused on the very same racers we were wanting to reach, we had to try it out.”

And while performance manufacturers were easily finding avenues to reach top-level pro racers, weekend warriors were a much more elusive (albeit just as important) demographic to market to.

“Today the bulk of racing programs and sponsorships seemingly focus on the high level touring series or professional ranks of racing,” Writesman said. “While every driver aspires to reach these heights it is at the local Saturday night circle track or drag-strip that many hone their skills and begin learning the value of quality performance parts such as Holley, MSD, Earls, NOS, Mr. Gasket etc.  The Contingency Connection is focused and fully committed to the grass roots level of racing.”

And according to Writesman, reaching the weekend warriors is paramount to successfully marketing Holley’s extensive line of performance products.

“Grassroots tracks across the nation are made up of thousands of Saturday night racers and teams. Introducing a new brand or quality product to a team or engine builder is the ultimate goal in marketing and sales,” Writesman said. “Racers become committed for life on certain brands such as Holley or MSD… and they likely first encounter these brands at a local track.”

“Although professional racing is a significant portion of our business, the majority is still weekend warriors,” Crawford said. “Without them our business wouldn’t be successful, so we continue to focus on supporting them whenever possible. The Contingency Connection program allows us to support racers at local tracks that we normally couldn’t reach directly.”   In addition to weekly awards, JE has sponsored the JE Sportsman of the Year bonus for nearly 15 years making it one of the highest paying, longest running sponsors at the grassroots level.

And most recently, manufacturers wanted a direct link to machine shops, engine builders, and performance shops—so Contingency Connection went back to the drawing board launching the “first of its kind” Engine Professional Rewards program.  Yet another simple coupon- based marketing program, the Engine Professional Rewards program sends money-saving manufacturer coupons directly to enrolled shops; increasing shop profitably. And in just 3 short years, what started with 300 enrolled shops has grown to 2,500 shops thanks to Contingency Connection’s AERA Engine Builder Association partnership. Shops enroll free and can learn more here.