Kingsport, TN: As the 2016 Sportsman class champion at Ohio’s famous National Trail Raceway, veteran drag racer Dana Thompson’s success on the strip is a combination of natural talent, hard work, a great team around him and the best performance technology on the market in his ’67 Camaro.

And throughout most of his nearly 25-year racing career, Thompson has utilized an innovative program to ensure he never misses a chance to try the latest and greatest performance products. 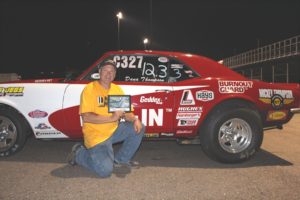 And those are just the parts he can recall.

“It is a great way for racers to be eligible to receive hundreds of dollars’ worth of certificates from many different companies in the racing and automotive performance industry,” Thompson said. “The Contingency Connection Racer Rewards program has helped me purchase some things I may not have purchased otherwise and has also allowed me to continue to run many quality parts on my race car season after season.”

Racers at participating tracks and series simply run sponsor decals for products they use (or would like to use) in order to earn the manufacturer rewards coupons.  The Racer Rewards books are rotated among classes and typically awarded to the first and second place finishers.  Although some tracks actually reward the tenth-place finisher, quickest reaction time, or hard luck award; meaning you don’t necessarily have to win the race to earn the awards giving racers an even better reason to come out week after week.

The program has turned into a high-value marketing tool for member tracks and series.  Racer Rewards pays 50 winners over the season; therefore tracks can pay more racers, without increasing their purse.  Plus, promoting a national $100,000 Racer Rewards attracts new racers, increases car counts, improves the show, and increases spectator turn out.  And with top manufacturers on board to provide signage and other marketing support, tracks are finding immense value in the Contingency Connection platform.

Michael Fornataro is the director of Thompson’s home track, National Trail Raceway. NTR has been a Contingency Connection member track for over 15 years, a true testament to the value and effectiveness of the program.  Fornataro sees it as a win-win-win for racers, tracks and manufacturers.

“The Contingency Connection Racer Rewards program is a way to offer added awards and incentives to your racers; and differentiate your track from the others,” Fornataro said. “It’s not just prize money, but parts my racers actually use, and they really do use them. Racers tend to be loyal to the companies that support their racing, so the Racer Rewards program is excellent marketing tool for the member companies.” 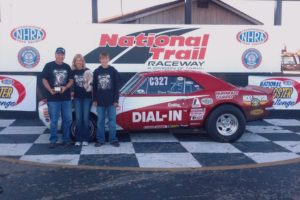 With more than 100 participating tracks and series, Contingency Connection has the power to reach weekend warriors and do-it-yourself shops from coast-to-coast and in Canada.

“It brings such an enormous level of credibility and professionalism to a track, especially a small town venue like ours,” Liscumb, Jr. said. “From the banners that connect you to reputable, national distributors, to the awards, bonus packages and banquet awards; the Contingency Connection program truly provides incentives for the racers to come out week after week to compete at your track.”

He added: “Quite honestly, it enhances your professional image to racers, sponsors and fans.”

To learn more about the Contingency Connection Racer Rewards program, go to www.contingencyconnection.com.