This year will mark record highs for Contingency Connection’s Racer Rewards program with a record number of manufacturers posting over 200 products; and a record 58 tracks and series hosting nearly 2,000 events national 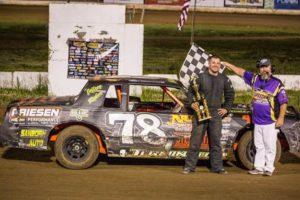 ly. This expansion provides sponsors an immeasurable opportunity to get their brands, products, and services in front of over 18,000 competitors and 50,000 spectators per week.

Each year, Contingency Connection continues to evolve offering new categories of racing and new venues and this year is no exception. Competition includes dirt, paved, drag, sand drags, road course, import, motorcycle, tractor pull, and diesel events. And it’s not just the additional number of racetracks and series for 2017 that has officials excited about the upcoming season—it’s the fact that the tracks and series are some of the top racing venues in the country.

“The Contingency Connection Racer Rewards program is the best,” said Kenny Wallace former NASCAR driver. “It reminds me of when my dad (Rusty Wallace) raced. One of the biggest thrills for our racing family was when we were given free product at our local racetrack.”

Newly enrolled tracks like Kenny Wallace’s’ Macon Speedway join a loyal family of Contingency Connection track partners–many of which have been with the Racer Rewards program for 10-20 years! Tracks such as Memphis International, National Trail Raceway, Richmond Dragway, Mobile Dragway, New Smyrna Speedway, Valley Speedway, and the Corn Belt Clash Dirt Late Model Series recognize the value that the program brings to their competitors, fans, local shops, and supporting businesses, as they continue to promote the program locally, in support of grassroots racing nationally.